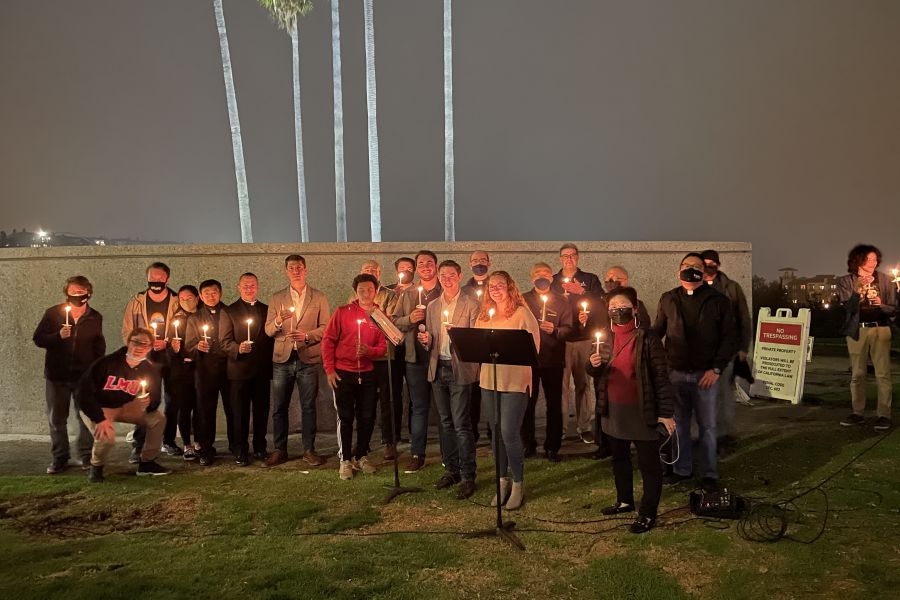 When Megan Glaudini, a student at Loyola Marymount University (LMU), learned that her Catholic Jesuit University was not stopping a campus fundraiser for Planned Parenthood, she felt “convinced” that she had to do it. Something.

“Hearing about the Planned Parenthood fundraiser on campus, I was originally completely disgusted, embarrassed and disappointed that the university was allowing this to happen,” she told CNA during a phone call on November 6.

“It took me a while to discern what I really wanted to do, what kind of action would even make a difference, and I really felt guilty and like I had to do something,” she said.

That “something” turned out to be the resurrection of the long-standing inactive pro-life group and the planning of a Rosary rally ahead of the Planned Parenthood fundraiser.

After meeting with a university official and numerous meetings, phone calls and emails with students, Glaudini decided “two days before the event” to resuscitate the campus ministry’s VITA program.

VITA, a Latin word meaning “life,” is the respect-life student group at LMU.

As the head of VITA with his friend Andrew DiCrisi, Glaudini planned a Rosary at the corner of Lincoln and LMU Drive on campus.

Glaudini, a young theology student at LMU, told CNA that the purpose of the rosary was to “emphasize the spread of love.” Some groups on campus were doing political things, she said, but her intention was to defend “human dignity and the right to life.”

“I just feel like it’s my job here on this earth and especially on this campus to defend the dignity and values ​​of my faith,” she said. “And that’s exactly what I thought I would do if we created this group and could pray this Rosary together.”

The Women in Politics student group hosted the Planned Parenthood fundraiser on November 5 in the Roski Dining Room. The club described the event on an online college calendar as “an opportunity for us to fundraise for a cause we really care about and have fun at the same time!”

In a Nov. 3 statement, the university told CNA that it does not sponsor or endorse the event.

The Glaudini Rosary Gathering brought together more than 20 people, including professors, Jesuit priests on campus and students.

She told CNA that “everyone was very grateful that we put this on because here on campus it feels like the Catholic population is shrinking and that goes with our values ​​and our dignity.” .

“The professors and some of the professional staff really told me how refreshed they felt after what we created because they felt Catholic students wouldn’t care on campus that this collection of fund for Planned Parenthood does take place, but we’ve proven them wrong, ”she said. .

Glaudini said the students who attended the Rosary gathering were “so grateful” to have found other like-minded people on campus.

After the initial announcement of the campus fundraiser, she sparked a petition campaign by an organization called RenewLMU which called on the president of the university, Timothy Law Snyder, to cancel the event, which he said. did not do. The group describes itself as “an alliance of students, alumni, faculty, donors and other supporters of LMU who seek to strengthen the Catholic mission and identity of LMU”.

Samantha Stephenson, a graduate of Loyola Marymount, who led the petition campaign for RenewLMU, told CNA: “A Catholic university should honor and uphold the principles of Catholic social education, at the heart of which is the principle of human dignity.

The petition garnered approximately 1,800 signatures from people as of Thursday afternoon.

The Catholic School’s fundraising event received a lot of media attention, to which the school responded on Friday before the event:

“This evening’s event hosted by Women in Politics, an independent student organization, is not sponsored or endorsed by LMU. The university does not support or fundraise for Planned Parenthood. LMU regrets the concerns this situation has aroused among members of our community and our Catholic partners. The university remains firmly attached to its Catholic, Jesuit and Marymount values. Going forward, LMU is reviewing and revising its policies and practices regarding student organized activities to ensure better alignment with our mission.

In a statement published in the newspaper of the Archdiocese of Los Angeles, Archbishop José Gomez of Los Angeles reacted to the event before it took place.

“I am deeply disappointed that this abortion fundraising event is going as planned, although I acknowledge the university’s statement that it does not support Planned Parenthood and its commitment to review its procedures for future events. . “

“As I have expressed in my conversations with Loyola Marymount officials, respect for the holiness and dignity of all human life is at the heart of Catholic identity and must be a fundamental commitment in Catholic higher education . I hope the conversation we started will continue, ”the Archbishop continued.

In addition to attending the Los Angeles March for Life on Jan. 22, Glaudini told CNA that she plans to have the VITA Club more active on campus and that she wants to welcome more Rosaries to the campus. ‘to come up.

Gualdini said she was hoping to have a meeting with President Snyder because she felt “we’re due for a conversation.”

She added of pro-life efforts: “But we thought about starting our own fundraiser for emergency pregnancy centers and also adoption centers, so that’s something we talked about. ”